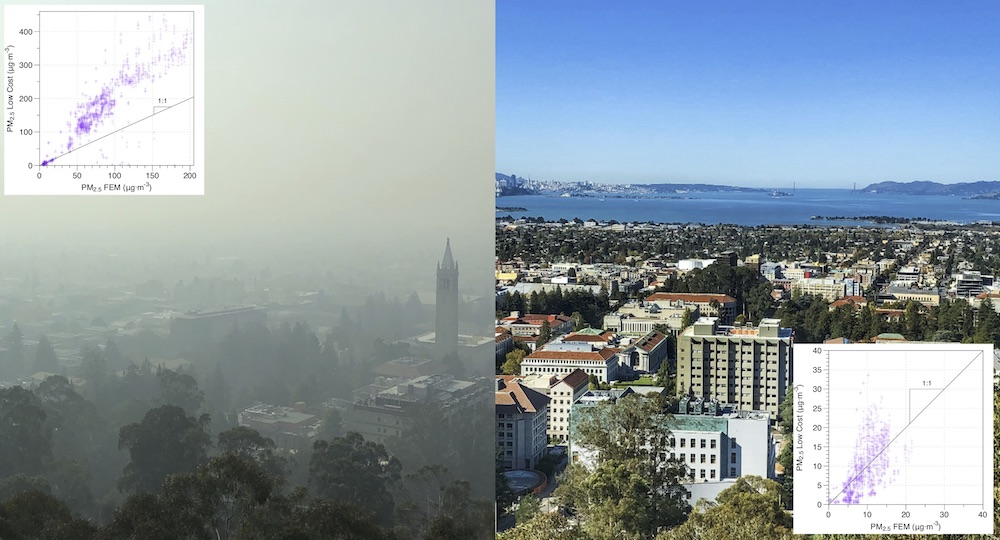 Over the last few years of frequent and intense wildfire seasons, many parts of the U.S. have experienced hazardous air quality for days on end. At the same time a number of low-cost air quality monitors have come on the market, allowing consumers to check the pollutant levels in their own homes and neighborhoods. So, air quality scientists at Lawrence Berkeley National Laboratory (Berkeley Lab) wanted to know: are these low-cost monitors any good?

Published recently in the journal Sensors, their study tested four models of low-cost air quality monitors during actual wildfire pollution events and found that their readings of PM2.5 – or particulate matter under 2.5 microns, which has been linked to respiratory and cardiovascular issues – were consistently higher than the reference monitor used by the regulatory agencies; however, since each monitor had a relatively consistent response to the smoke, it is possible to use the readings to estimate true PM2.5 levels. Overall, the researchers concluded that the monitors can provide actionable information.

“We compared the low-cost monitors to one that is used by regulatory agencies in air monitoring stations. It turns out their correlations are phenomenally good. When one goes up, the other goes up at the same time, and it is proportional. That gives us a lot of hope for being able to use them for real information,” said Woody Delp, one of the lead authors of the study. “And it could let someone know how well their new portable air filter is reducing smoke particles. But from an absolute point of view, it’s becoming clear these sensors require some adjustments and checks to use the numbers.”

These devices, which cost in the range of a few hundred dollars, were compared to reference monitors used by regulatory agencies and researchers, which cost $20,000 or more. They also tested two monitors that are used by researchers and industrial hygienists and cost in the range of $5,000 to $10,000. Additionally, the researchers compared public data from PurpleAir PA-II monitors to nearby regulatory monitoring stations impacted by four wildfires in 2018.

In the past, air quality monitoring has been limited to the high-priced professional monitors, making them inaccessible for personal use. The manufacturers recommend that the devices be calibrated to the specific pollution source of interest because the sensors use an optical sensing technique that responds differently to different sources. Pollution from a backyard barbecue or car exhaust may differ in size and density from pollution from a forest fire, and a forest fire may emit different types of particles than an urban fire.

The low-cost monitors use the same optical sensing technique – estimating particle concentrations based on light scattering – but use mass-produced optical sensors that are not as precisely machined as those in the professional-grade devices. In contrast, the most expensive monitors, those used by regulatory agencies, are calibrated using gravimetric analysis, which is based on the weight of particles.

With the air quality monitors deployed at Berkeley Lab inside a well-ventilated single-story laboratory building, the researchers collected data as the Camp Fire burned in Northern California in the fall of 2018. They found that the four low-cost monitors substantially overreported PM2.5 levels, by factors of 1.6 to 2.4 times higher than the readings on the regulatory reference monitor. However, the relative changes correlated well with both the regulatory and professional monitors.

The researchers calculated an adjustment factor of approximately 0.48 when using PurpleAir PA-II monitors outdoors during the Camp, Carr, and Mendocino Complex Fires in California and the Pole Creek Fire in Utah (meaning the readings should be multiplied by 0.48 to estimate the true PM2.5 level). This correction is very close to one of the data conversion options (“LRAPA”) given on the PurpleAir website.

Good for other indoor pollutants too

In a separate study earlier this year, Delp and Singer, along with first author Zhiqiang Wang, evaluated six low-cost air quality monitors by comparing their output to reference PM2.5 and PM10 measurements from 21 common residential sources, such as frying, grilling, microwaving popcorn, vacuuming, and burning candles. The study, published in the journal Building and Environment, was an update to their 2018 study.

They found that for most pollution sources, the low-cost monitors tracked with the professional ones within a factor of two for PM2.5. Delp said the consumer monitors “enable people to identify activities that emit fine particulate matter inside their homes and to determine if operating filters or just keeping windows closed is effectively reducing exposure inside when there is very bad air pollution outside. For these purposes, they work as well as professional grade monitors, and appear to be very reliable.”

“We are impressed and excited by the usefulness and performance of these air quality monitors that cost under $300,” said Singer, head of the Indoor Environment Group in Berkeley Lab’s Energy Technologies Area.

Both studies were supported by the Department of Energy’s Building Technologies Office and the U.S. Environmental Protection Agency Indoor Environments Division.

– Kiran Julin contributed to this article