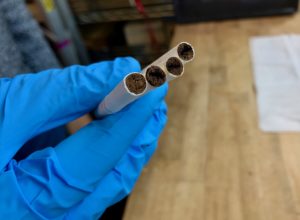 A class of alternative tobacco product called heat-not-burn is quickly gaining in popularity across the globe. The product manufacturers claim that these battery-operated devices produce a “clean,” nicotine-laden vapor that contains fewer irritant and carcinogenic chemicals than a conventional cigarette – and are therefore a less harmful option for tobacco users. New research from the Department of Energy’s Lawrence Berkeley National Laboratory (Berkeley Lab) shows that, although the chemical emissions from these devices are indeed lower than those produced by cigarettes, they are still high enough to raise concern.

“We found that the emissions from a widely used heat-not-burn device are not negligible,” said first author Lucia Cancelada, a former affiliate researcher in Berkeley Lab’s Indoor Environment Group. “These products are engineered so that it looks like hardly anything comes out of them; but just because the emissions are minimal doesn’t mean they don’t exist.”

In their study, now published in Environmental Science & Technology, the Berkeley Lab team examined two types of emissions produced by a heat-not-burn device: mainstream emissions, the chemicals present in the aerosol inhaled by the user; and sidestream emissions, the aerosolized chemicals that emanate from the device but are not inhaled by the user, analogous to the smoke coming off the tip of a lit cigarette. Overall, their experiments demonstrated that the emissions are on par with those of electronic cigarettes.

Although the product tested in this study is not yet available to purchase, it was authorized for sale in the U.S. by the Food and Drug Administration (FDA) in April 2019. It is currently sold in about 43 countries, including Italy, France, the U.K., Canada, Japan, and Russia. The “smoking” component of the product is a cigar-shaped electronic holder unit that stores and charges inside a hand-sized case. To use the device, the user simply inserts a tobacco “heat stick” (resembling a short, thin cigarette) into the holder and presses a button to activate the heater. The interior of the stick – a rolled sheet made of processed tobacco, glycerin, and other additives – heats to between 180 and 220 degrees Celsius. At these temperatures, the nicotine and other chemicals have evaporated, rather than burned, and are inhaled through the filter in the mouthpiece as an aerosol.

“Heat-not-burn products, just like electronic cigarettes, emit aerosols – mixtures of gases and particles. In the case of electronic cigarettes, calling these emissions vapor is genius marketing, but misleading, because users may think they emit water vapor, making it less harmful in their minds,” said Hugo Destaillats, a chemist in Berkeley Lab’s Energy Technologies Area and deputy of the Indoor Environment Group. “But neither e-cigarette refill liquids and cartridges, nor heat sticks, are water-based. Most contain a large amount of glycerin, and our previous research has shown that heat-driven breakdown of glycerin is a source of harmful chemicals.”

Destaillats and co-authors in the Indoor Environment group recently published two studies on the emissions profiles of e-cigarette aerosols and on the predicted health and environmental impacts of using these devices. The team also continues to research the effects of thirdhand smoke – the lingering residues left behind after smoking conventional cigarettes, which they first described more than a decade ago.

The objectives of the current investigation were to identify and quantify hazardous chemicals present in heat-not-burn emissions, and see how the device’s emissions compared with the data the scientists have collected about other tobacco products. They also sought to assess the veracity of the existing, publicly available data on the device by comparing the team’s results with measurements presented in studies run by the manufacturer and the handful of other independent studies that have been conducted thus far.

The scientists tested a device purchased in France with three different types of heat sticks, using the same system that they employed in their past e-cigarette assessments: a laboratory-made chamber equipped to isolate the ambient air around an operating device (the sidestream emission) and a pump-operated syringe that draws the aerosol out through the mouth end of the heat stick (to capture the mainstream emissions). After comparing with their previously collected data, the team found that the heat-not-burn device’s chemical yields were significantly lower than those of conventional cigarettes; though, for many compounds, the amount emitted was comparable to electronic cigarettes.

While examining how the chemicals produced by the device impact indoor air, the authors noted that emissions yields for 26 known irritants and carcinogenic compounds – including acrolein, acrylonitrile, benzene, crotonaldehyde, phenol, and pyridine – were relatively similar to those reported in the previous studies. “When we modeled indoor concentrations of acrolein that could be found in a home with regular heat-not-burn use and in spaces with multiple users, such as bars, we found that in certain conditions levels could exceed what the state of California considers to be a safe level for chronic exposure,” said co-author and chemist Lara Gundel.

Additionally, when predicting the intake of irritants and carcinogens by the user, the team found that consuming 20 heat sticks a day – equivalent to a pack a day of conventional cigarettes – would deliver doses of acrolein, benzene, acetaldehyde, and formaldehyde comparable or higher to health-based exposure limits set by the state of California.

The authors conclude that while heated tobacco products appear to be a weaker indoor pollution source than conventional cigarettes, the impacts cannot be brushed aside and need to be investigated further. “Painting a complete picture of the risks posed by these emerging products, and making sure this information is available to the public, will require more independent studies,” said Destaillats. “Our group has a long history in describing the impact of tobacco products on the indoor environment, and can provide a unique perspective on this matter.”

Like the team’s other tobacco investigations, this study was funded by the University of California’s Tobacco-Related Disease Research Program (TRDRP), which is supported by California state cigarette taxes.

The other scientists involved in this work were Xiaochen Tang, Marion Russell, Mohamad Sleiman, V. Nahuel Montesinos, and Marta I. Litter.