Ashok Gadgil, Senior Faculty Scientist at Berkeley Lab, has been recognized as a Social Design Circle honoree for 2017 by the Curry Stone Design Prize. The prize awards innovative projects that use design to address pressing social justice issues.

Gadgil's research focuses on designing low­-cost solutions to the developing world’s most intractable problems. He and his lab teams, composed of scientists and students, work to find resilient, sustainable solutions implementable at a massive scale. Gadgil eschews trendy gadgets and technology and focuses on affordable and robust solutions that can be deployed as widely as possible. 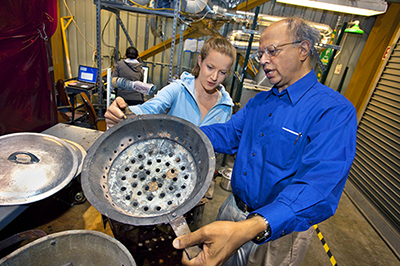 The Gadgil lab works on a multitude of projects, but is perhaps best known for three:

The Darfur Stove: a highly efficient wood­ burning stove that is 4 times more efficient than traditional 3 stone stoves. This means that women in developing countries have to spend considerably less time gathering wood for cooking fires; it consequently reduces the risks of being attacked while far from the village. The Darfur Stove also considerably reduces emissions – especially once one considers that over a billion families worldwide still use biomass cooking stoves daily.

ECAR (ElectroChemical Arsenic Removal) is a technology to remove toxic levels of arsenic from groundwater in South Asia, and elsewhere. It is based on using small amounts of electricity for controlled release of a particular kind of iron rust in water that has toxic levels of arsenic.  Owing to the natural chemistry that subsequently occurs in the water, the rust binds irreversibly with the arsenic and can be removed by settling, leaving the water safe to drink.  The process is undertaken at room temperature and under atmospheric pressure and is highly effective even at high levels of arsenic in groundwater.

UV Waterworks was originally conceived in response to a cholera epidemic, and uses UV light from a low ­pressure mercury discharge (similar to that in a fluorescent lamp) to disinfect drinking water. The system has no moving parts and only requires 40 watts of power to power the bulb. For that, the system can disinfect approximately 4 gallons per minute, or, one person’s entire water needs for an entire year at a cost of a couple of cents.

The three projects highly emphasize the nature of Ashok’s work. Through thoughtful design (and smart chemistry), the solutions from Ashok’s lab provide benefits to millions with elegant, affordable solutions.

Read the full article at currystonefoundation.org/practice/ashok-gadgil/